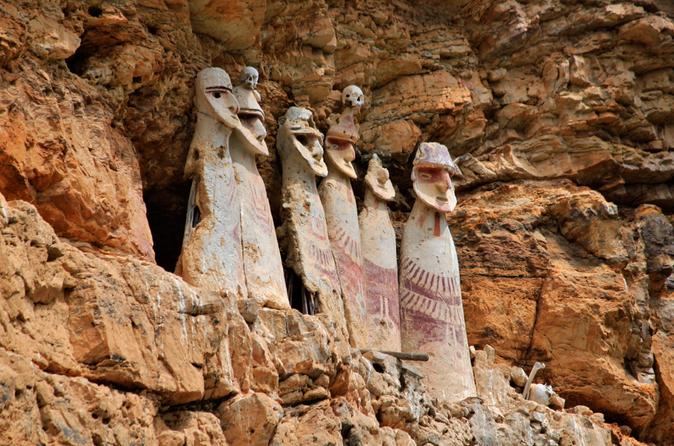 Chachapoyas is described by historians as a "Great Kingdom", for its large territory and organization. It holds many stone monuments, funeral buildings and mausoleums that can take us to a magical and unique place.

Arrival to Jaen. Transfer from the airport to the city of Chachapoyas (“Chachapoyas Premium Service”). Accommodation in Chachapoyas.

In the morning, we will go to Cruz Pata town, and then, we will continue towards the burial site of Karajia. We will enjoy a panoramic view of Luya's main square along the way. Cruz Pata, known as the Crosses Plateau, is the starting point of our journey by foot or horse to get to Karajia; it takes 30 min. approximately. We will see Karajia sarcophagi, which are part of Chachapoyas pre-inca culture; they are made of stone, wood and clay, and have an anthropomorphic shape; they are unique for their enormous size (up to 2,5 meters high) and careful elaboration. We will go back to have lunch in the city of Luya. Then, we will visit Caverns Quiocta, a capricious work of nature, located in the district of Lamud, Luya province. Inside these caverns, there are seven rooms with stalagmites and stalactites, each one has a different name due to its curious forms. Return to the city of Chachapoyas.

After breakfast, we drive to the town of San Bartolo, from here we will go on horseback to the Mausoleums of Revash, which are constructions of funeral homes at the foothills of huge rocks; they are painted in red and cream color. Some are up to three floors high, and others have gable roofs with T-shaped, cross-shaped and square windows. The mausoleums can be observed from 100 meters approximately. After the visit we will enjoy lunch. Then, we will visit the museum of Centro Mallqui or Leymebamba Museum, which design replicates local architectural traditions. This museum holds a valuable collection of 240 mummies found in the Lagoon of the Condors. Return to Chachapoyas.

In the morning, we will go to Kuelap, a majestic architectural site built by Chachapoyas. On our way, we will make a stop to have a panoramic view of the Macro Archaeological. Then we will go to the starting point towards Kuelap, we will climb on horseback or on foot to the "Fortress", which is built on top of Cerro Barreta (3000 m. a. s. l.).  It is a place surrounded by beautiful landscapes; at first, it seems inaccessible since it is protected by colossal walls and cliffs on three of its four sides. It has three platforms and inside they have circular buildings decorated with rhomboidal and zigzag friezes. Its complex interior architecture indicates it was a well-organized population group. The surrounding landscape and the natural scenarios make it unforgettable. We will return to Choctamal for lunch. Return to Chachapoyas.

At the agreed time, transfer to Jaen airport with "Chachapoyas Premium Service" to board our flight.

Chachapoyas is described by historians as a "Great Kingdom", for its large territory and organization. It holds many stone monuments, funeral buildings and mausoleums that can take us to a magical and unique place.